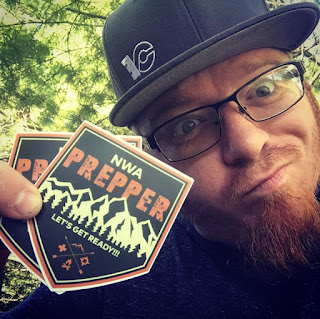 This is Justin with Axis Off Grid & Survival. Here is the link to his school.

He is holding the newest "must have" survival gear! NWA Prepper stickers!  ( OK, not really)

Justin has his info on his web site so I will not ask you to read it twice.  The thing I want to share with you is how he has effected me and my family.

I first found out about Justin via YouTube.  He was doing survival skills videos as he was practicing for one of his longer schools he has completed.  I was enjoying his videos.  My son "Scout" was in the room with me and he overheard Justin mention that his boy was in Cub Scout.  My sons ears went straight up, just like a wolf scouts ears should.  After that we started watching the videos together.  We were having a great time.  Justin was going to a 45 day total immersion class to gain another teaching certification.  He posted a video every few days.  My  son and I loved it.  We looked forward to the time together.  We looked forward to what he was doing next.  When we would watch him preform or show us a skill we went and did it too.  We built shelters. We crawled around looking for grubs and worms.  We set snares.  We built fires.  We did as many things as we could find the time to do.  "Just like him" as my son would say.

Justin had completed his 45 day course and was off to a new adventure for he and his family.  He posted that he was having a yard sale to get ready for a move that was going to happen in the next few days.  My son and I watched it and I said "Son, that is ten minutes away. Do you want to go?"  Of course he did.  We jumped in the truck and went to his yard sale.

When we arrived we were both nervous.  After all this was "the guy".  We walked around and shopped ( I got two great Glock knives).  After a few minutes we got our courage up and told him we liked what he did on YouTube.  We told him about our small channel as well. He looked at us and called my son by his YouTube name "Scout".  It made my son so happy.  They talked about the shelters Scout had made and about scouting.  I was a proud father.  It was great to see someone that we look up to treating my son like a fellow and not a little kid.  I was also blessed to get a few minute of his time.  They were busy with the sale and packing to move.  Justin ask if I was OK if he gave my son something.  I said sure.  Justin went inside.  When he came out he handed my son a handmade neck knife w/sheath.  He told him about how he made it and some of the ways he had used it in his classes.  He also gave him a training video on survival skills.  These items were not in the yard sale stuff.  He went into his home to get something special for my son.  I will never forget that.  My son will never forget that.

This just a small sample of his heart.  Please check out his web site.  Look for him on YouTube.  He is on Facebook too.


Thanks Justin 'Sage" for all you do!